There are a few power units I’ve been using, testing, and documenting over the last many months. It’s easy to get 5V 2.4A charging, and Qualcomm Quick Charge standards (or Anker’s analogue to them) are pretty easy too. But there’s a somewhat new charging consideration that’s lighting up even more this year, with a possible catch.

When Apple released the iPad Pro (12.9″ 1st generation) in 2015, it was an amazing media consumption and even creation device. Support for the new Apple Pencil for creative types, a huge beautiful screen, and a huge 10Ah 38Whr battery… what’s not to like?

How about charging that huge battery?

Aye, there’s the rub. The iPad Pro came with a 12 watt USB-A charger like iPhones did, and a USB-A to Lightning cable like iPhones did. It’s what Apple had available, and it would probably recharge your iPad Pro in 4-6 hours. (As you can see on the right, mine hasn’t left the box in about 3 years.)

Soon, though, Apple released a USB-C to Lightning cable, which would allow you to charge at about 28 watts (that’s 2.3x as fast on a good day). This cable also opened the door to directly connecting to the new USB-C Macbooks, and with the 30W or better Apple chargers, you could get that 28 watt charge going. Most USB Power Delivery chargers and battery packs at 29 watts or higher can also rapid charge your iPad Pro.

When the iPhone 8 generation came out, Apple started supporting a rapid charge at 18 watts for those devices, and newer iPad non-Pro models (in the last year) have also taken on the faster charge rates.

The catch was, Apple did not sell or license their USB-C rapid charge chips for third party manufacturers. So while some overseas companies made USB-C to Lightning cables, they couldn’t charge faster than the standard USB-A cable, and wouldn’t be MFI-certified. So $19-35 went to Apple for each of those cables, and you got your rapid charging.

You also got typical Apple cable sturdiness (such as it is), which left many people replacing cables and grumbling.

But then, it all changed

Now that Apple is moving to USB-C for charging their devices, they’re also allowing third party USB-C to Lightning cables by licensing the C89 and similar connectors/chips.

Anker announced one last month at CES, pre-orderable now on their website and shipping later this month, and a crowdfunding project from a company called Cascade Cables is also promising such a cable coming in April.

These new cables are sturdier, potentially more aesthetically pleasing, and the Anker cable is priced lower than the Apple version by a couple of bucks. Now the question is whether these cables will support the full range of charging rates that those of us with larger devices will need. 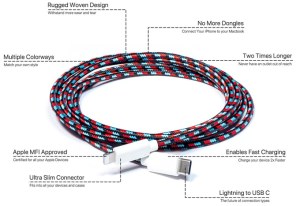 Anker responded to an inquiry on Facebook about the iPad Pro charge rate by telling me that my iPad had USB-C and I could use USB-C to USB-C cabling. Alas, the 2015 iPad Pro doesn’t have USB-C, and they didn’t follow up on the question. However, their pre-order page says it uses USB Power Delivery, which has me feeling optimistic.

I’ve inquired with Cascade Cables as to whether they’ve tested with 28W devices. I’ll update this post if I hear back from them.

It takes more than a cable

The easy option is to pick up an Apple USB-C Macbook charger.

If you already have one for your Macbook, you can use it to rapid-charge your iOS devices as well. And note that if you have another USB-C charged laptop (like a Dell XPS 13 or XPS 15, a newer Lenovo, and so forth), you can use the Apple chargers as long as they feed enough wattage to charge your device.

If you’re patient, Anker has also announced their entry into the GaN (gallium nitride) charging field, the Powerport Atom PD1 charger which gives 30 watts of juice in a tiny form factor. It’s listed on their website for pre-order on Amazon, but Amazon is currently offering email alerts for when it’s available to order. I’ll update when that comes out of unobtanium as well. I have the RavPower 45W GaN charger in house, and will be writing that up soon too.

And if you want to see what power profile your charger is negotiating, regardless of which charger or cable you use, I’ve used the Plugable ($20) and Satechi ($30, right) USB-C power meters with good results. You don’t need a power meter to just charge your devices, but it can be useful to troubleshoot slow charging, flaky cables, or power profile mismatches (like the ones we’ve experienced with the Dell XPS 13 9370).

I’ll also have some updated coverage on battery packs to rapid charge your iOS devices, and even charge your USB-C Power Delivery laptops. The new HyperJuice “World’s Most Powerful USB-C Battery Pack” and Omni Ultimate battery packs are in house and ready to test, when work lets up a bit.

What are your charging concerns, and what interesting solutions have you found to keep your devices up and running? Share in the comments, or ask any questions you may have.

As always, if you buy through our links above, we get a small commission, which then goes back into buying more stuff to review here and on rsts11travel. We appreciate your support.

I’m a 24 year veteran of Silicon Valley/Bay Area system administration, now retired from doing Real Work(tm). I’ve done networks, storage, IT, operations, caffeine procurement, and just about anything else that plugs in or acts like it. I’ve worked in 149-person and 149,000-person companies.

Today I work for Cisco designing solutions and telling stories around datacenter technologies. See the links above for disclosures and caveats to my coverage here.