I didn’t really expect to be writing another build report so soon for my primary desktop. But in October of this year, it seemed to be time for a hardware revamping for my primary home desktop.

About five months ago, I built a 7th generation core i7 Intel NUC with Optane technology to replace an older 3rd generation desktop. That system ran a dual-core, quad-thread i7 processor, 32GB of DDR4 laptop memory, a 32GB Optane drive, and a 2TB solid state hybrid drive (SSHD).

Well, after three months I still felt the pain of a dual core system more than I’d expected. And in the meantime, my brother sent me a barebones Dell Precision Tower 7910 as an early birthday present. I was a bit concerned about it at first, since it uses Xeon v4 processors and DDR4 ECC registered memory, neither of which is inexpensive. The 1300 watt power supply had me concerned as well.

I decided it would be worth rebuilding the system anyway, since I could easily sell the system if I chose not to use it, and it’d be fun to run a more modern workstation for a while if I did decide to sell it. Spoiler: I am not planning to sell, but I’ll share the build report here so you can think about the options in case this meets your needs. 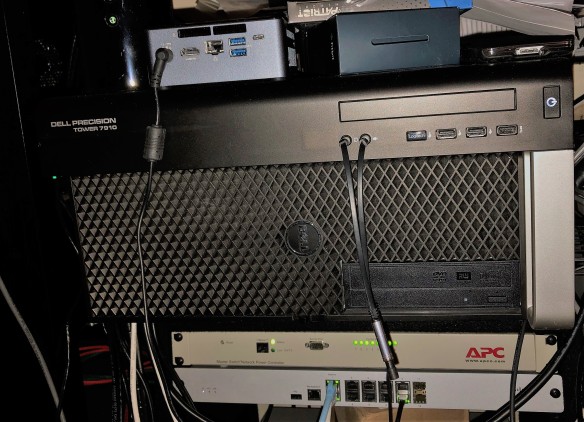 Dell Precision 7910, pictured beneath the Intel NUC desktop we built out this summer. 1U power distribution unit and 1U security appliance below for scale. Sorry, no banana.

I had written most of this post, but when I went to confirm pricing, I realized that I’m running non-registered, non-ECC RAM in this system. Despite the documentation saying UDIMMs are not supported, and Crucial’s compatibility list showing all ECC Registered RAM, the parts I’m using are unbuffered non-ECC non-registered DDR4.

This may not be an optimal configuration, but if the cost and availability work better for you, it may be worth a try. Note that you will almost certainly be unable to mix registered and unregistered DIMMs, and you won’t be able to mix LRDIMMs and regular RDIMMS.

Update [2019-07-09]: I’ve noticed that the system has been sluggish, acting like it was swapping things out to disk even though I was only using about half of the total 32GB of RAM. Flashbacks to bad Solaris configurations in 2004. I replaced the unsupported memory described above with a set of four PC4-1700R Registered ECC DDR4 RDIMMs, and so far with a little bit of use it’s back to what I’d expect from a 28-core system with plenty of memory. Still using nearly half the RAM, with Chrome alone taking 6GB, but it’s snappy and not painful to use.

END_OF_DOCUMENT_TOKEN_TO_BE_REPLACED

I’m a 22 year veteran of Silicon Valley/Bay Area system administration, now retired from doing Real Work(tm). I’ve done networks, storage, IT, operations, caffeine procurement, and just about anything else that plugs in or acts like it. I’ve worked in 149-person and 149,000-person companies.

Today I work for Cisco designing solutions and telling stories around big data and analytics. See the links above for disclosures and caveats to my coverage here.