Welcome back to rsts11 for the summer. We’ve got a lot to cover in the next few weeks.

I haven’t really done a build report in a while, so when I realized I was getting double-dinged for high power usage, I started looking around for ways to save power. One was my desktop PC, which while very nice (with 8 dimm slots and lots of features I don’t use), is using around 250-300W for a 3rd gen core i7 processor.

I decided, based on availability and curiosity, to build out a 7th gen Intel NUC (Next Unit of Computing) PC, which conveniently supports Intel Optane memory. You can read a lot about the Optane technology, but in this application it’s a turbo-charged cache for internal storage. The newer NUCs support it in place of a more conventional m.2/NVMe SSD (used alongside a 2.5″ SSD or HDD), and of course you can use it as an overpriced SSD if you don’t want to use the Optane software.

See my earlier post about an Intel NUC for use with VMware. That NUC is currently running Ubuntu and Splunk for training in the home lab.

I’ll take you through the build manifest and process, and then we’ll look at benchmarks for five configuration permutations. 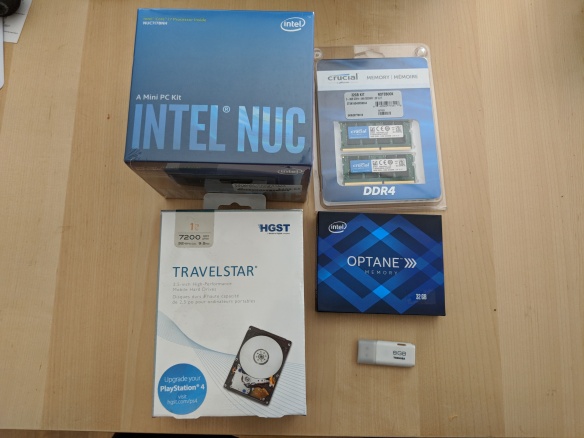 I’ve used Intel NUCs going back to the 3rd gen Intel core processors, so they’re fairly easy to get around. The system I chose, NUC7i7BNH, has the following features:

Likewise, I probably did a bit of overkill with the 32GB Optane module, and a 2TB 2.5″ Seagate FireCuda gaming drive (2TB spinning disk plus onboard flash memory). I do tend to keep a lot of downloads locally, including my entire Dropbox folder, and want to have the best acceleration possible.

Notably, the current generation of NUC doesn’t require you to buy a localized power cable; once you have RAM, storage, and a keyboard/mouse/display, you’re good to go.

Getting Optane drivers ready to go

Any of you who built systems in the first decade of SATA will get flashbacks from this, but you will probably need to install additional drivers to make use of Optane. Even with the 1803 release of Windows 10 (downloaded in the last three days from Microsoft), an Intel Rapid Storage Technology (RST) driver is required, as is the Optane application to enable/monitor/disable Optane technology.

Intel does have good documentation (pdf) on this, whether adding Optane to an existing Windows 10 installation, or installing fresh. You obviously need a motherboard and CPU that support the Optane technology. This will be 7th gen or newer Core processors, and motherboards that explicitly call out Optane support (just having an m.2 slot isn’t enough).

I tested five storage options to get a feel for relatively objective performance.

The benchmark software I used included current versions as of July 5, 2018:

Note that the results are for comparison only, and may not be validated with the benchmark sites. They are definitely not endorsed or even known by the benchmark software makers.

Note that benchmarks are often worth less than the paper they’re printed on. I like to use them for comparison within a system over time, or to get some level of comparison between systems, but depending on what you’re doing, your results may be much better or much worse than these.

Unsurprisingly, CPU, RAM, and GPU tests didn’t show a distinction between the four storage options. Also unsurprisingly, disk performance with Optane was much better than without. I was a bit surprised that unaccelerated writes were better on the standard 7200rpm disk compared to FireCuda.

NovaBench (graph above) showed 2-4x better writes with Optane, and 7-9x better reads, roughly speaking. PCMark10 (graph below) had less shocking results, but Optane improved the 7200rpm disk by 20% on “Essentials,” but only 3% on Digital Content Creation. With FireCuda, Optane only improved Essentials by 5% or so, and the other two tests were similar to the 7200rpm tests 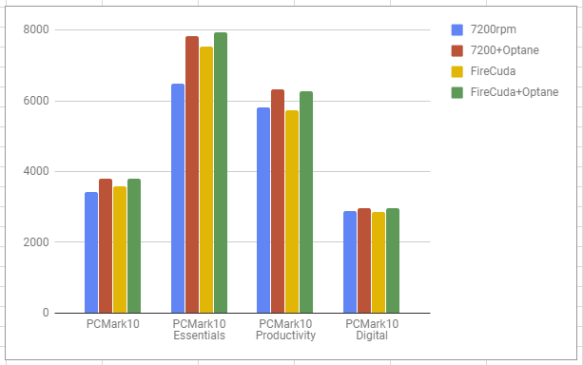 CrystalDiskMark showed similar jumps in performance, with sequential reads going up by 10x and writes 3x. The results for the 4KiB queued tests were absurdly higher, with the worst results being 250x higher on reads and 98x faster on writes.

You’ll notice that on some of the rows, the 7200rpm and FireCuda drives don’t even show up. The random read and writes came in around 1 MB/sec for each, whereas with acceleration via Optane, they came in 93 MB/sec at worst, 621 MB/sec at best. 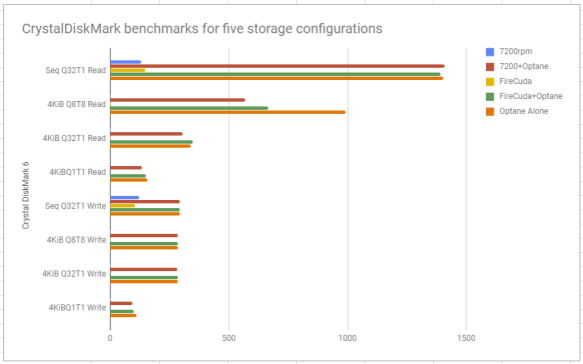 I also ran Crystal DiskMark against the Optane disk as an SSD with NTFS filesystem (disabled Optane technology with the app, and then partitioned/formatted with Disk Management in Windows). Effectively this was the result of an NVMe SSD; I would probably not bother with a 32GB SSD for Windows, but I wanted to see how those results would compare with an accelerated HDD.

Give your NUC a hat?

There are two USB 2.0 headers on the NUC motherboard that don’t go anywhere. There are no extra holes in the case to let you use them anywhere either. However, if you don’t plan to stack your devices and want an extra USB option or two, there are companies like GoRite who make feature lids for the 5th generation and later NUCs. Some of the options include a supplemental fan, USB 2.0 ports, audio, video (HDMI, DVI, VGA), external wifi antennas, serial ports, memory card readers, Fast Ethernet, TV tuners, and more. You can also just pick a different color for the lid if that’s all you need.

I’ll be putting some time this weekend into migrating my files and apps to the new system so I can retire/migrate my power-hungry desktop.

The testing I’ve done, while rather generic and not exhaustive, definitely shows that an Optane module will improve your disk i/o performance. An SSD (whether M.2 or 2.5″ or both) will still be the best performance choice, but I was able to get a 2TB SSHD and the 32GB Optane module for less than the price of a good 1TB SSD.

Do you need the 32GB module? Maybe not, but for a larger spinning disk it may be worth it. You’ll see similar performance improvement with a 16GB module, though, so if you need the extra $30 for something else, go for it.

Have you tried Optane yet? If so, let us know what you think in the comments.

Update after two weeks use

I wrote this post, and sat on it for about two weeks so I could see how the Optane acceleration felt during my regular usage pattern over time.

The first couple of days were painful. Switching browser tabs would often lock up, and boot-up was not as fast as a pure SSD. I ordered an M.2 NVMe SSD in case I needed to scrap the Optane experiment, but as time went on, it got more stable.

I decided to disable Optane caching while I synced half a terabyte of Dropbox data. This may have been more superstition than actual benefit, but I figured the caching would not help me on sustained write, and I bought myself another write cycle in the process.

I later realized that part of the degradation may have been from a radical core count reduction. My previous system was a 3rd gen core i7 with 6 cores/12 threads, whereas this one is a 7th gen core i7 with 2 cores/4 threads. RAM is the same quantity (was 8x4GB DDR3, now 2x16GB DDR4), and I’d say the storage is a definite upgrade.

As I wrap up this post, I’ve been running on the Optane system for about 16 days, and it’s quite livable. I did export some of the peripheral connections to an OWC USB-C 10-port dock, which provides some additional charging capability as well as getting some of the USB-A connections off the NUC itself. I’ve plugged my Drobo into the dock, along with my Fitbit Ionic charger and a couple of other items. I could also run a second monitor this way (or even a third), but that would require some more desk space that I’m running short on.

All things considered, it’s a very viable desktop system, and I’m mostly happy with the performance and capacity. It will shortly be mounted on the back of my monitor (to help with airflow and free up some shelf space). And I am a bit tempted to replace the Optane with the ADATA NVMe drive I bought, but I think that may do better in another tiny PC that can’t use Optane (like an HP Elitedesk 800 G2 Mini I have in the home office).