Welcome back to rsts11. Earlier this year you saw us post a first look at the Antsle “personal cloud” development systems, which provide a fanless, silent development and desktop cloud-style provisioning environment with the KVM hypervisor and Linux Containers (LXC).

Later, we built a system that approximated our view of the obvious evolution of Antsle’s model, albeit not fanless (thus not completely silent), and not as compact. We used the SuperMicro X10SDV-4C-TLN2F-O 4-core, 8-thread board that featured dual 10GbE copper ports and support for 64GB non-registered or 128GB registered memory.

Well, Antsle announced today that they will be releasing Xeon-D based models in mid December. 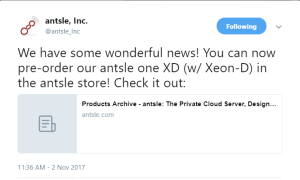 Their low-end machine, with similar specs to the 4-Core board we used, starts at $1,349. Models with 8-Core and 12-Core boards are also available. 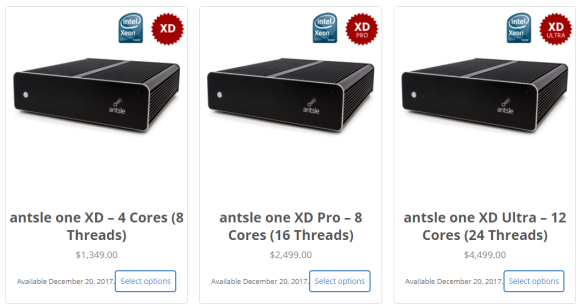 The prices jump more than the difference in board cost because the base RAM/SSD configurations also grow, as do the uplift options.

We still haven’t ordered one of the Antsle boxes due to shifting project budgeting, but the idea still has promise. And they don’t seem to do eval boxes (although if they change their minds, we’d love to try one out).

As we noted in our original take on the antsle model, you can probably build something similar on your own, and if you find it worthwhile and/or practical to spend time building the hardware and software platform, you’ll probably have lower capital expense building it yourself. If you just want to plug a silent box in, plop it onto your desk, and go to work, the nominal added cost for the pre-built appliance is probably worth spending.

Have you tried the antsle platform, or built your own similar system? Let us know in the comments.

Disclosure: While I’ve had an email exchange with the CMO of antsle prior to writing the original antsle post in March 2017, I don’t get any consideration from antsle for discussing their product. And while it is relatively resilient (mirrored SSDs, ECC RAM), I wouldn’t recommend it for an enterprise deployment into production. But then, it’s explicitly not aimed at that market.

4 thoughts on “Quick Take: Antsle coming out with Xeon-D models with 10GbE in December”