rsts11 note: This is the second of a two-part series featuring mobile internet routers. The first part is posted over on rsts11travel.com, as it is a bit milder technology. The second part appears on #rsts11 since it’s a bit more POHO than random travel, and will be cross-promoted on the travel side.

When you travel, you probably have a number of devices that demand connectivity.

Many venues limit your allowed devices, and maybe you don’t want your devices out on the open network. Additionally, you may want to use streaming devices or shared storage in your room, and that may not work with typical public network setups. Last time we looked at some battery powered routers with charging functions and other network features.

Today on rsts11 we’ll look at some choices for sharing a wired connection as well as a cellular modem. We’ll briefly revisit the Hootoo and Ravpower routers from part 1, and then dive into Meraki, Peplink, and Cradlepoint devices for the higher-power user.

There are three schemes we’re considering in this series.

A caveat up front with regard to security and obfuscation: Not all of these options offer the same level of security for your devices, and most will not limit visibility of your connectivity as far as the facility staff, the ISP, or others on your network is concerned. Nothing in this series should be taken as replacing your OS and application updates, antivirus and anti-malware/anti-spyware software, and of course realization that security is subjective.

You can’t always count on an Ethernet connection in a hotel, but when you do, it may give a higher quality connection–less interference with other hotspots, and (hypothetically) less risk of utterly terrible engineering in the deployment. Obviously these solutions won’t help in coffee shops and airports, but if you’re somewhere that has a “public” wired network, here are some options to consider.

These two options are on the lower end in terms of network capacity, but if you’re on a tight budget in terms of dollars or space, keep them in mind. Read more about these two routers in part 1 of this series.

No, really boosting your wired connection

The new products we’ll consider each support multiple Ethernet connections as well as wireless. They’re a bit pricier, are powered by AC adapters, and take up a bit more room as well. If you don’t need the cellular function, you can probably charge a mobile device, and with some mobile devices, you may be able to use your mobile phone in hotspot mode as a USB modem as well. 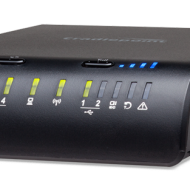 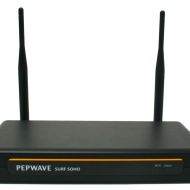 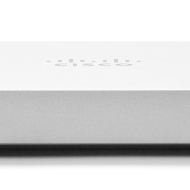 I own each of these devices–the SOHO was won through a Facebook giveaway, and the Z1 was purchased through Meraki’s Cisco employee purchase program (disclosure below). I bought the MBR1200B when they still sold them at Fry’s Electronics, replacing an MBR1000 purchased there a couple of years earlier, and Cradlepoint upgraded me to a now-discontinued MBR1400 a couple of years ago.

They’ve each been used at some time to drive network connectivity at my workshop across town, where I didn’t always have wired Internet and occasionally had to depend on a 4G LTE USB modem.

They each cover schemes 2 and 3 above, in that they provide Ethernet and USB modem uplink options. Peplink and Cradlepoint additionally support Wifi-as-WAN, meaning you can connect upstream via wifi and also allow wifi client connections. So technically those two fit all three options. Peplink and Meraki have gigabit Ethernet; the Cradlepoint MBR1200B supports 10/100 Fast Ethernet.

Why go with Meraki Z1?

Traffic management, traffic shaping, and analytics are very strong on the Meraki platform. If you’re not already running Meraki at home, the centralized configuration and templating probably won’t mean much to you, but being able to see and control the traffic remotely isn’t too bad.

Firmware support is likely to be long-term for this model, although you will need an ongoing subscription to the Enterprise License to use and update it. And if you do run an MX or a virtual concentrator at home (see the writeup at rsts11 regarding virtual concentrators and Meraki VPN), you have a seamless VPN back to your home office wherever you plug in (pretty much), on whatever network connection you have.

Why go with Cradlepoint MBR1200B?

If you want to load balance more than two connections, Cradlepoint is where you want to look. Supporting dual Ethernet WAN, an Expresscard 34 modem, two USB modems, and upstream wifi, it can make a relatively bulletproof access point, with VPN functionality and optional cloud-based management through the Cradlepoint Enterprise Cloud Manager (ECM) also available.

It looks like the MBR1200B is the remaining product in the small business line from Cradlepoint, so you can still purchase it. The last firmware version calling out support/changes for MBR1200B (v5.2.0) was released in June 2014.

Unfortunately the MBR1400 was discontinued; it offered gigabit Ethernet ports and an option for an internal LTE modem on certain models. However, most people won’t be hamstrung too badly by 100mbit Ethernet on a hotel or cellular Internet connection. And you can still acquire them in the usual places (Amazon, eBay) although they probably won’t see active software/feature development from here on. (There was a bug fix in v6.0.1 (mid-2015), but v5.2.0 was the last one to call out the MBR1400. )

Why go with Peplink Surf SOHO?

The Surf SOHO is the least expensive of the options, while still supporting gigabit Ethernet. Note that there are three versions of the Surf SOHO, with the MK3 being linked above supporting 802.11ac.

Peplink should have firmware support going forward for most versions of Surf SOHO. SOHO HW1 is excluded from Firmware 7, the latest version, but the Surf SOHO and MK3 are listed for 6.x and 7.x releases.

Peplink really aims at the POHO (Psycho Overkill Home Office) user with this product, or “Power User” as they call us. For most people’s uses, this lower-cost option will meet all needs, and if the advantages of the Meraki and Cradlepoint offerings aren’t needed, I wouldn’t hesitate to suggest the Surf SOHO.

Not all modems are the same

If you’re considering one of these options for use with cellular networks, be sure to check the supported modem lists (Cradlepoint, Peplink, Meraki) before buying a USB modem. We had to replace our Verizon Novatel 551L modem when switching from the Cradlepoint/Peplink models to Meraki’s Z1 and MX devices because of a much smaller supported modem list. The Pantech UML295 (from $55 via third party sellers on Amazon) worked well on two of our MX devices and the Z1. The 551L or the UML295 should work on Cradlepoint or Peplink with current firmware and modem support files.

In this post we covered some beefier options for portable, albeit slightly less mobile, connection management/sharing on the road. With the Cradlepoint, Peplink, and Meraki “teleworker” class routers, you can get a bit more power, with a tether to a wall outlet or equivalent power source, various VPN options, and multiple uplinks with failover for when you can’t be offline.

What are you using for your mobile or “branch office” type deployments? Do you need cellular or are wifi and cabled connections good enough? Ask in the comments below!

Disclosure: We met with Cradlepoint and Peplink partner Frontier BV at past Interop events; Cradlepoint provided an MBR1400v2 router for us at no cost, but it’s no longer a current product, replaced by their AER series.

Further disclosure: Robert Novak works for Cisco, the parent company of Meraki. The Z1 and MX84 devices mentioned in this post were purchased through the employee purchase plan out of Robert’s own funds, and neither Cisco nor Meraki reviewed or endorsed this coverage.

3 thoughts on “Internet on the Road, part 2 – how to optimize your travel connectivity”