My friend John Obeto pointed out some pre-release coverage of Satechi’s new USB-C power meter a week or so ago. I’ve had a number of different USB-A (standard port) testers and meters for a while, but with more devices coming into rsts11 headquarters with Type C connections (including the XPS 13 9350 and XPS 15 9550, Apple’s 12″ Macbook, the ASUS Zenpad Z10 from Verizon, and the Nexus 6P by Huawei and Google), I’ve wanted to look at power consumption beyond what an A-to-C adapter could reveal. 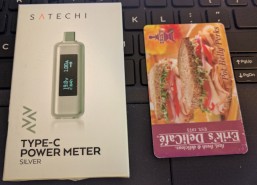 The Satechi Type-C power meter, with credit-card-sized card for scale 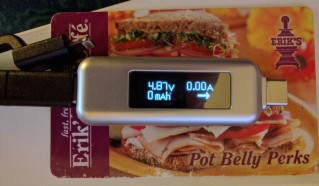 For those of you new to USB-C, it’s designed (in part) to be a universal connector for power and data, incorporating high speed data in a connector shared with Thunderbolt 3 (40gbit capability), a reversible connector like Apple Lightning, and some daisy-chaining capabilities like Thunderbolt 2. The standard allows for up to 100W of power, although the highest powered adapters I’ve found are 60W. The Dell Thunderbolt 3 docking station has a non-standard option beyond this; when you’re connected to a recognized Dell device it will bump the power up to 130W just like the stock XPS 15 adapter.

But the catch is that USB-A power supplies are generally limited to 2.4A at 5V, with some exceptions for Qualcomm Quickcharge and Samsung Adaptive Fast Charging and the like (which can go to 9V or 12V on compatible devices). So most USB-A power meters will only show/handle 2.4A at 5V, or 12 watts. My smaller USB-C devices easily pull 15W whereas the XPS 15 should pull a lot more than that.

There is a device known as “Twinkie” that Benson Leung uses for his testing, but it’s priced out of my toy range and does more than I usually want to do. (Read to the end to see why what Benson and his cohorts do is so important, if you don’t like the smell of fried electronics in the morning.)

Satechi, a company known for Mac accessories in large part, released a Type-C Power Meter last month and I ordered two of them last week. If you’re going to buy directly, sign up for their newsletter and you’ll likely get a discount code. If you’d like to order with Amazon, this link may help me with further gadget purchases. It’ll set you back $30 either way, and the Amazon listing is sold and shipped by Satechi. (It wasn’t on Amazon yet when I ordered.)

So what does it do? 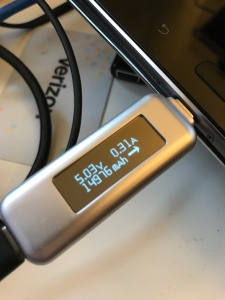 Like most power meters, it’s a read-only device. It will indicate the voltage, amperage, and total power fed to the device in the current connection session. Unlike USB-A devices which are unidirectional, USB-C supports charging in either direction–I used my Galaxy Note 7 to charge my iPhone 6S for example. So the USB-C meter will detect (and indicate) the power direction.

At right, you’ll see the meter connected between a 60W Google charger (the Pixel C one) and an ASUS Z10 tablet. I left it running overnight, which is why you see 14976mAh of power displayed. The tablet was drawing about 5V at 1A while the screen was on in “daydream” mode, and the 0.3A was for screen-off mode.

And the Macbook with a nominal 5V 2A supply (IKEA’s JYSSEN in-desk wireless charger with USB port) and the Nomad 3-in-1 cable gave me about 5V 2.4A (right).

All things considered, it reported what I expected with each of the devices I’ve tried so far. I need to find one of my iPad Pro rapid charging cables, and I’m planning to try it with the Dell Thunderbolt Dock to see how it handles that power source.

So what doesn’t it do?

A lot of the early coverage of this device touted it as a way to identify counterfeit or even dangerous cables or power sources. That’s only fractionally true.

If you read the work that Google’s Benson Leung does investigating cables and chargers, you’ll see that it takes a lot more than volts and amps to identify whether a cable is safe, standards-compliant, or does what it says it will. The “Twinkie” mentioned above plays into it, being able to see how the cable is constructed electrically and whether it has the right resistors and the right wires connected and signals acceptable power requirements. This tester will not necessarily do that for you.

If you’re concerned that your cable is lossy or your “high speed charging adapter” is crap, this tester may help you figure that out. You can compare what the adapter promises with what the tester sees, and if it’s too far off, you know there’s an issue somewhere.

But if you want an indicator of whether a given cable will fry your device, like this cable did, or like this one could, you’re still going to want to look for Benson’s reviews on Amazon or watch his Google+ collections (USB-C reviews and news).

I can’t say whether this tester would reveal the stuck high voltage line that is mentioned in that “could” link above, but to be honest, I wouldn’t want to count on it. You never know if a rogue charger or cable will negotiate in a strange way or generally act unpredictable.

How much power can it take, Captain?

The limit of the USB-C standard today is 100W of power, presumably 20V at 5A, although the largest standard charger is 60W (12V 5A). Dell’s TB15 Thunderbolt 3 dock for the newer XPS laptops can drive 130W through its proprietary handshake. I was wondering how the Satechi tester could handle that.

Their west coast (San Diego-ish) support was impressively expedient. I sent an email about 9pm and had an answer by 9am the following day.

They advise that the device will handle 4-30V DC with .05-9.99A thus providing a maximum of 299.7 watts. That’s more than twice what the beefiest USB-C power adapter today can put out, so I’m pretty comfortable there.

They also mention that it passes Thunderbolt 3 through. So this should bode well for the TB15 dock test.

I’m going to play with this device a bit more, and especially want to see what it will do when connected to a 130W USB-C type charger or a Thunderbolt 3 port (or both). I’m also going to check it out for reverse charging under Android “N” and the iPad Pro rapid charge cable. Watch for a second part in a couple of weeks with those items as well as some USB Type A meter observations.

Is it something you need? Probably not, to be honest. Is it something you want? Probably. One place I’d see it being really useful is if you’ve got a device that’s completely depleted (i.e. the Macbook I left under a pile of mail for a month) and want to make sure it’s taking a charge. Or just to see if that $20 charging cable is twice as good as the $10 (or the $2.99) cable. At $30, it’s not a bad gadget to have around.