I’ve been doing a lot with cryptocurrency mining lately, so there’s been a lot of activity here on rsts11 about it as well. For this post, a lot of the concepts can apply to a home lab in general, although it was inspired by several conversations on mining channels on Telegram and Discord over the past month.

In the late 1980s, actor Colin Quinn was an announcer on a game show called Remote Control. It’s not terribly remarkable in context, but as I’ve had a few people of differing technical levels ask about remote control for their mining rigs, it seemed relevant.

Whether you’re managing a single server, a home lab, a mining rig, or an entire farm, it’s likely that your gear will not be in  your home office or possibly not even in your home at all, but you won’t want to travel to where the gear is everytime something needs to be power cycled. In the case of one of the people I consulted for recently, he was going to deploy mining rigs at a friend’s house in another country, and would not be able to be hands-on with the gear more than 2-3 times a year.

So the considerations I’m making here are tuned for a relatively small number of systems that may not have IPMI console access, and may not have convenient access or remote hands services available. In a datacenter or similar environment, you may have contracted services to send someone to hit the reset button or look for issues. For many of my readers, this is not a luxury you’ll enjoy.

My own remote access adventure happened when my oldest mining rig was a few miles from home. Thanks to my Meraki networks, I did have direct VPN access, but the rig would occasionally crash and require a physical power cycle. It was only 5-10 minutes each way, and I did have 24/7 access to the facility, but it got very inconvenient at times.

The considerations I’ll layout here fall into a couple of categories.

Disclosure: Neither Robert M Persig, Colin Quinn, nor Ken Ober have any association or endorsement or even awareness of this blog post.

If your equipment is on your home network, you probably don’t need to worry too much. Even in an environment where my servers are just yards away in the garage, I usually don’t care to go out to work on them if I can manage them from my desk in the house. But if your gear is in another location, on another network, you’ll want a VPN.

I personally use the Meraki VPN functionality in the MX84 and MX64 security appliances. This is easier if you have employee discounts on the gear and licensing, or if you work for a Cisco partner and can get NFR or partner discounts. For most people this isn’t practical.

For most people I would recommend looking into prosumer/small business solutions like Ubiquiti, Cisco Small Business RV-series, or Peplink’s Surf SOHO routers. For a couple hundred dollars per end, you can get a secure and relatively easy to manage connection, and you can connect from a phone or tablet or laptop as well as from a network on one end.

The Surf SOHO MK3 router is $199 from Amazon at the moment. It supports Ethernet WAN (to cablemodem or DSL or the like) with USB failover, Wi-Fi As WAN for connecting to another wifi network for backup, and 802.11ac wireless internally (which will be useful for some power control options later). It also provides 4 gigabit Ethernet ports for your LAN, and even the modest 20Mbps encrypted VPN will easily support any mining operation you’re likely to use. 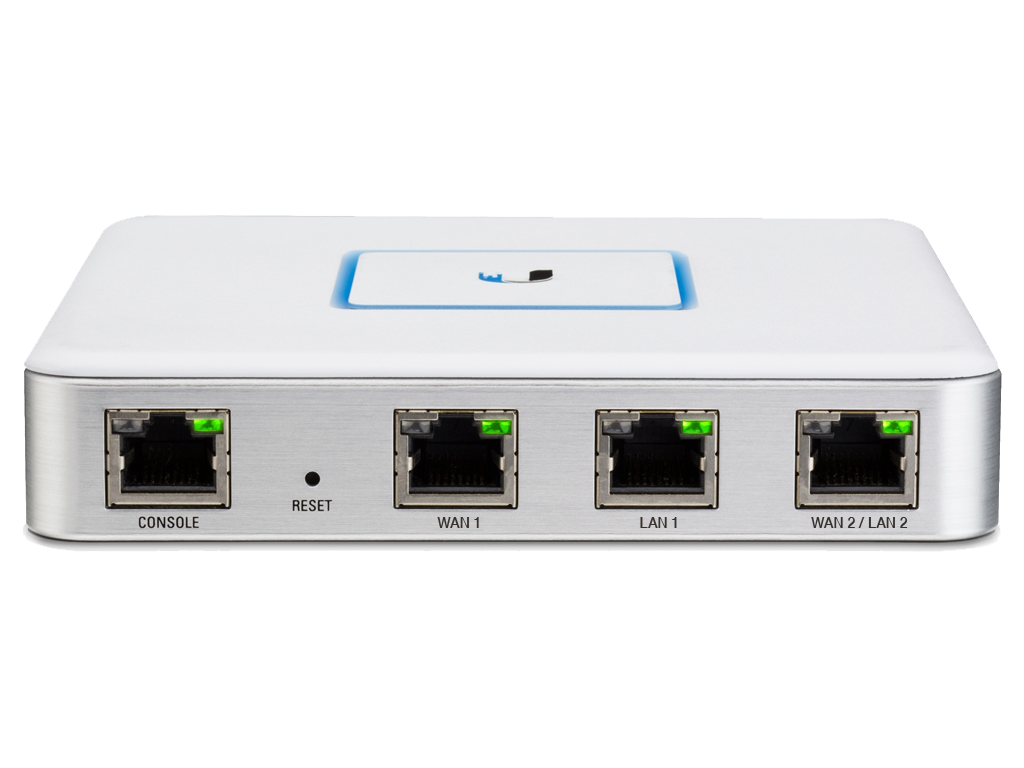 Ubiquiti has a range of security gateways that can affordably provide similar functionality. The USG-PRO-4 rackmount gateway at $316 supports copper and SFP networking, while the compact form factor three-port USG comes in around $100 and can be powered with a PoE splitter (I have one powered by a US-8-60W managed PoE switch, which also powers the UC-CK Cloud Key and a wireless access point.

I didn’t have time to dig into some of the consumer VPN-friendly routers, but you will likely find many of the recent ASUS routers (like the RT-AC68R at $120) are pretty easy to get going with VPN and load balancing and possibly even cellular failover.

If you don’t want to use hardware for the access, you can use something like Teamviewer or another remote desktop service that provides secure cloud-enabled access. You’d need a computer inside the remote network for this to work; I have an Intel NUC on my remote site as a backup and to simplify remote access when I’m away from home.

Some computer motherboards support remote virtual KVM over an IPMI or other management interface. I’m not aware of mining motherboards offering this functionality, although Supermicro motherboards and most enterprise server manufacturers do offer it.

If you don’t have the option of an IPMI KVM, there are a number of options for a KVM-over-IP solution that provides you local keyboard/video/mouse access with a client program or web access. There are single port units that you can attach with Velcro to the side of the machine, up to stackable rackmount switches that can handle dozens of devices with multiple local and remote users.

Either way you will need secure network access to your remote location to take advantage of this. Do not put your remote KVM directly on the Internet under any circumstances.

eBay is flush with Avocent KVM over IP devices. I found a DSR2020 bundle with PS/2 modules and another DSR2020 with USB modules for $300 or less. These modules are interchangeable, so if some of your systems are PS/2 only (or you want PS/2 access for some motherboard functionality) and others are USB, you don’t have to go all one or the other. There are even HDMI, Displayport, and Sun modules available.

I also found an older (2007?) StarTech 4-port unit for about $110, but you’d have to wrestle the Internet to find the cables and power adapter for that deal.

Most of the time, especially for mining and other live OS uses, you can use SSH or a remote desktop protocol to get into the machine. However, if the network on the computer has failed, or if you need to get into the BIOS on a consumer motherboard, you’ll want the functionality of a KVM terminal.

This was the first problem I had to solve for my mining rig back in 2018. As is my way, I went for overkill with a dual-drop Digital Loggers Ethernet Power Controller II that I got for about $50 at Weird Stuff Warehouse. You can still find them used on eBay for under $100 shipped.

It has two power circuits, each of which has four switchable banks of two outlets. These circuits are not failover or a static transfer switch, although you could layer a STS on top of it if desired. You can control each bank from a front panel switch or from a web interface. You can also lock a bank on from the front panel switch, making it impossible to turn it off remotely. I chose this option when I accidentally shut off the switch between the security appliance and the rest of the network (including the EPC) while I was out of town. 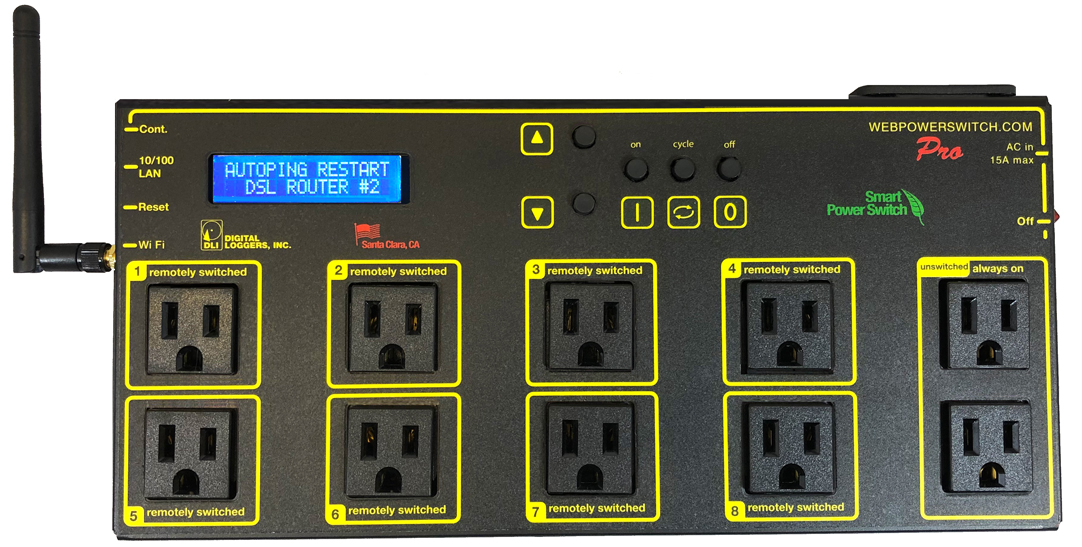 You can find smaller versions like the LPC-3 for around $50 if you don’t need multiple circuits or other advanced features. There are also a few other brands like Cyberpower and Baytech that offer similar gear.

Before buying any of these, I’d suggest checking to see if documentation and recent firmware updates are available. My EPC2 was last updated in 2019, and I got the updated code without having to have a support contract. It looks like BayTech may require registration or a support ticket to get updates (I’ll try that out when I plug my RPC-2 in), and CyberPower doesn’t show firmware on their site for the unit I linked above. Digital Loggers does have docs and firmware available openly at the moment. 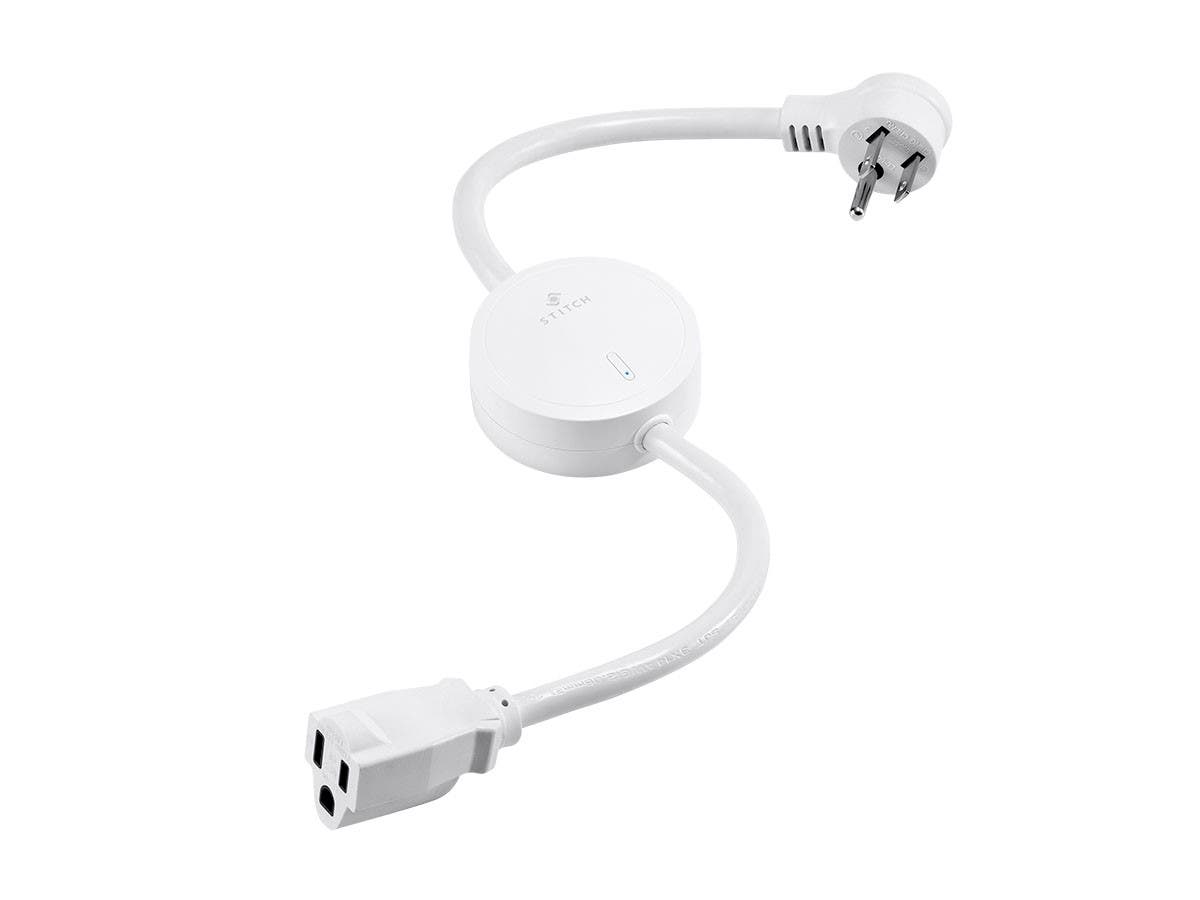 I’ve actually taken a liking to the Stitch by Monoprice Smart Wi-Fi power monitor and switch, which comes in between $15-25 per device depending on sales. ($23 at Amazon right now, or $12.99-19.99 from Monoprice directly) This is a single outlet 15A device that provides remote control–including scheduling with Alexa, Google Home, and IFTTT–and power monitoring. I can watch current usage as well as daily usage, and can power the connected device on and off from a mobile app as long as both my mobile device and the outlet device are connected to their respective networks.

The Stitch devices might get annoying if you’re managing dozens of devices, but I’m currently monitoring two rigs and my desktop, with plans to monitor a few more devices in the next couple of weeks.

Other considerations for a remote rig

For any of the gear above, you’ll probably want at the very least a surge protector, and if practical, a UPS battery backup. Some remote power controllers may offer surge suppression, but check the specifications before assuming.

The downside to mining rigs is that they can outgrow consumer grade UPSes (one of my rigs currently draws over 1200 watts, and my highest powered UPS at the moment is a 1500VA Cyberpower unit which wails at 900 watts). You can look for used enterprise UPSes, but most of the larger ones require 230V AC. Double check the cords and input requirements, as well as the outlets compared to what you need to connect.

I found a 2000VA 1800W 120V Eaton power backup for under $500 shipped, and a similar APC SNX2999RNKV2U unit (which may or may not include batteries) at about $250. For any UPS you’re buying used, I’d check the price on replacement batteries (Amazon Prime is great for these even if they do have to be shipped ground).

If you’re using a KVM switch with local console, even if you’re not going to be near it often, I’d suggest dedicating a physical keyboard, pointer, and display to the gear. That way when you do go on-site, you’re not scrambling for these accessories.

I’m fond of the IBM/Lenovo ThinkPad style keyboards with pointing devices. I had the PS/2 version on my home PC in the late 90s, and since then I’ve gone to the USB version and most recently the wireless version (ThinkPad TrackPoint Keyboard II, around $115 on Amazon although I only paid $85 direct from Lenovo during a fall sale).

You can get USB-powered DisplayLink monitors, but they will probably not work before the OS loads. I would recommend one of the portable monitors that supports HDMI input; you can convert your KVM switch’s VGA or DVI connector to HDMI with an inexpensive cable. The LePow monitors (around $160 with instant coupon at the moment) came well-recommended to me, although I ended up with the Corprit 15.6 FHD display which is currently $120. If you have the room, a conventional 15″ LCD monitor will do well too, . I have a couple of these around in various places, including HP, Dell, and a couple of other brands. You can probably find one at a thrift store or garage sale for just a few bucks.

These are some pointers based on my own applications and research, keeping with the POHO (Psycho Overkill Home Office) model that rsts11.com has had for a decade now.

Have you found other options that work well for you? Or any gaps I’ve left in the preparations for remote access? Share in the comments if you like.