Update: The HSC folks were out with a stand at the Electronics Flea Market in Sunnyvale this morning (March 9, 2019). Signs and flyers noted that they’ve sold the store to Excess Solutions of San Jose. Should be interesting to see how the inventory is integrated. 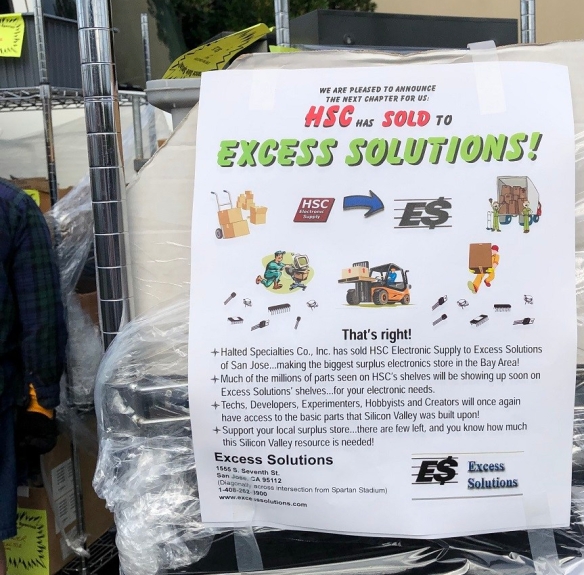 Update: HSC closed this past Saturday, January 12, 2019. There was an impressive crowd, cake and coffee, and last minute deals. Best wishes to the owners and employees for success in their next stages, whether retirement or different work.

Halted has been in business for 54 years now. The Homebrew Computer Club often visited back in the day (including both Steves). I wasn’t around the Bay Area for most of that time, but got an introduction early in my time here, in the late 90s.

Around the turn of the century, Halted had three locations, with the main one being in Santa Clara on Ryder St, just off Central Expressway and Lawrence Expressway (near the Sunnyvale Frys, the pre-1996 Weird Stuff, St John’s Grill, and Ham Radio Outlet among others). Gradually the remote locations closed, and the Ryder store was left.

Halted was known for components of all sorts, books and magazines for people who made things from those components, antique radios, tools, legacy computer components, and all sorts of other things. It wouldn’t be unusual to find people in the store with ham radio transceivers on, students buying components for an electronics class, people reminiscing about the radios they used to listen to during the war, and random bargain hunters looking for computers and electronics to mess with at home.

They also had a well-known parking lot sale every September, where cases and crates and pallets would come out of the warehouse, hot dogs and donuts would be put out for sale, and you could get some incredible deals on things you’d forgotten you needed. And you could also find them at the Electronics Flea Market sometimes, with a truck full of carts from the store.

The New York Times had a feature on Halted in 2009, revealing and even foretelling the greatest strength and weakness of the business at that point. 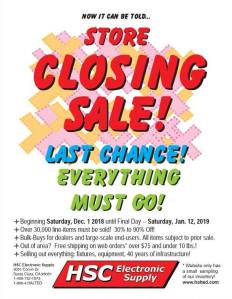 In early 2016, after closing off and vacating the back half of the store on Ryder, they announced they would be moving to another location an intersection away on Corvin. And in February 2016, after 28 years in the old location, they moved to a smaller space just down the road. More of the property was publicly accessible; the main lobby was carpeted for a change (which could be good or bad), and the parking lot sale shrunk a bit (due to a shared parking lot) but continued for three years.

Alas, with costs going up, active makers moving away, and the state of business in Silicon Valley, Halted announced in November 2017 that they would be attempting to sell the business. Ten months later as the final parking lot sale approached, they didn’t have a buyer and posted another update. And last night, they made the announcement I think many of us were expecting but hoping would not come.

We’re lucky to have more than 2-3 days of notice (as opposed to the surprise closure at Weird Stuff), and there will probably be a few reunions and scavenger runs over the next few weekends.

First of all, you’ll probably want to head to Santa Clara in the next few weeks, maybe even more than once.

As you may remember, Weird Stuff sold their inventory to Outback Equipment in Gilroy, who operate an eBay store called outback6. Weird Stuff’s website has disappeared in the last month or so, it seems. Outback haven’t made much noise since the announcement, although they do have several thousand auctions listed and allow local pickup.

Anchor Electronics in Santa Clara is still there, and has a clean, carpeted, friendly environment for picking up components and tools (and the occasional bit of legacy hardware–I recently saw an Apple // numeric keypad there).

Excess Solutions in San Jose is also still open. The component selection is bigger, as is the space, and they also have an e-waste recycling bin out front. However, the computer and networking selection has gone down in recent months, and the 50% Off Everything sale is long gone.

I have not heard of any other stores that would fill in the space left by Weird Stuff and soon Halted, but if you know of anywhere, feel free to share in the comments. I’d be happy to visit, review, and spread the word.

20 thoughts on “HSC Electronics will be halted early next year”