I probably should’ve had more of a teaser title, but it’s still a bit of a shock, so you get the bottom line in the title. After 32 years, Weird Stuff Warehouse is closing this Sunday.

Updates at the end. This post has been updated multiple times since publication.

Also see the unfortunate news from Halted here: HSC Electronics will be halted early next year

If this is your first time here, please do take a look around. I’ve written about gear I’ve bought at WeirdStuff, but there’s a lot more here, from system builds and hardware, Psycho Overkill Home Office technology, and then there’s rsts11travel which breaks out my travel and related adventures and discoveries. 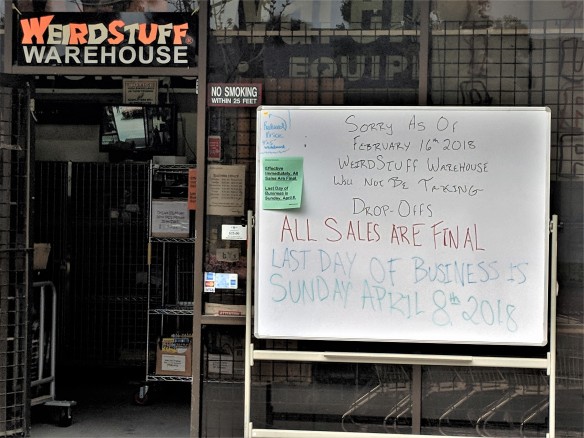 Ars Technica wrote about them in 2013. The Six Fifty posted last year. Atlas Obscura got a post just last month apparently. You can see an archive of people’s Weird Stuff posts on Instagram here.

And over three decades after they opened up, serving businesses that wanted to get rid of no-longer-needed stuff as well as individuals who “needed” that stuff, Weird Stuff Warehouse is closing its doors at the end of business on Sunday, April 8, 2018.

The word started making the rounds on Twitter yesterday afternoon, after news a month ago that Google had purchased the building on Caribbean Drive (near Yahoo! headquarters and the Sunnyvale landfill and water plant). Some photos (including mine above) confirm the closure is coming sooner than expected.

Rumor has it that someone has bought the inventory of the store. Many regulars are hoping it’s someone planning to return it to sale at a different location, rather than just scrapping and stripping the electronics and adding to landfills. But we don’t know anything specific on that.

My friend Ray, who helped me pick my first apartment in the Bay Area, also introduced me to Weird Stuff back in late 1996. They had just moved from a much smaller location across from the old Fry’s on Lawrence Expressway at Kern Ave in Sunnyvale (now home to Safari Run), and it was downright amazing.

I bought my first Sun 3 system, and my AT&T UNIX PC there, and probably a hundred or more computers over the years (and two air conditioners, and a bunch of zipper bags, some Selectavision cartridges, and maybe even a bag of chips). It’s not an exaggeration to estimate that I’ve averaged one visit a week for over 20 years.

Over the years, they’ve had a stint with a boxed software and cable branch store on Warm Springs in Fremont (across from the original Fremont Fry’s). For a few years the current “as-is” section of the warehouse was blocked off, and half of it was their weekly (or was it biweekly) sealed bid auction (one of three such auctions in the area; only the AuctionBDI one remains).

Weird Stuff was never the only place to go. If you wanted a current era cable or accessory, or a computer with the latest specs, and you wanted to be sure you’d find it, there was a better place (Fry’s, or Best Buy, or Central Computers). If you wanted the hard sell for something you didn’t really need, this was not the place to go.

But if you knew what you were looking for, or at least what you were looking at, it was a treasure trove… a great place to get a thousand steps on your Fitbit, see things you remember working on at a previous job (and in some cases, see an actual item you worked on at a previous job), drop off your e-waste for recycling or reuse, and probably find that missing part for a sentimental project you’d been putting off working on for years. 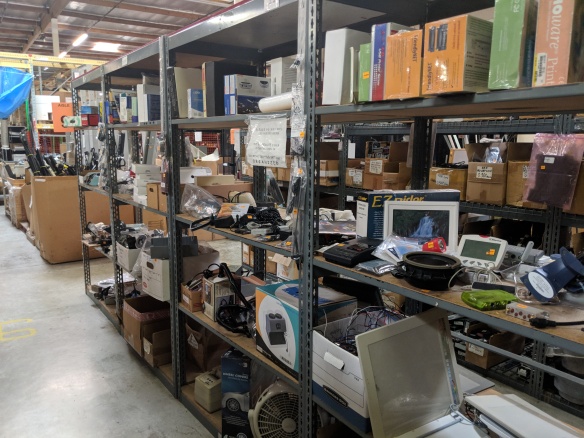 As local companies started cycling through hardware, the PCs (and Macs) they had for sale became more modern, and sometimes more unique. Modern laptops and desktops as well as recent generation rackmount servers have been a prominent fixture in the middle row for a couple of years now, sometimes interspersed with Silent 700 terminals and Sun Ultra 2 workstations and old boat anchor network gear.

The scrap laptop rack (pictured below) has been one of my favorites in the last year or two. It’s a gamble, but the odds are probably better than any casino you’d go into. 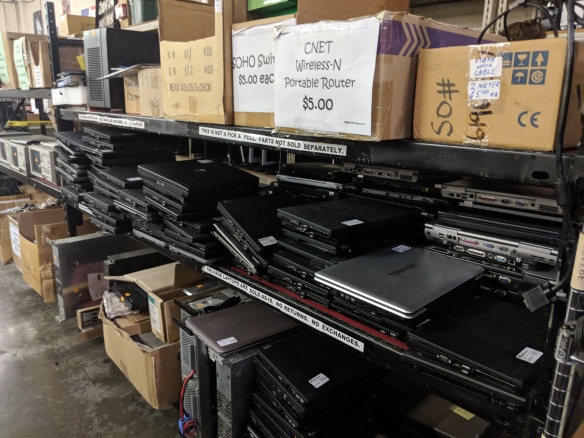 Sure, there’s been Craigslist and eBay for almost the whole time, but it’s harder to go handle the stuff (and compare it to other stuff) before you buy it on those forums. And sometimes you just want to go window-shop, not having anything in particular in mind. Some of my best finds were completely serendipitous, and some of them I still use to this day (including the desktop PC I’m using to type this post). 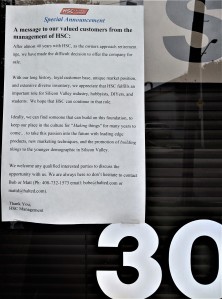 Most Weird Stuff fans folks know of Halted / HSC Electronics, which has an odd bit of history with Steve Jobs and Apple Computer (as I just learned today via Twitter).

Earlier this year, the owners of Halted announced their intention to sell the store after 40 years of ownership. They moved last year from their long-time location off Lawrence to a smaller site a few blocks away on Corvin in Santa Clara near the fire station.

More focused on people who built/maintained electronics (and radios), there was still a bit of overlap from time to time, but not as much as you might have expected. With both closing in the same year, they leave a substantial gap in the local marketplace. They are still open for now, or were two weeks ago (I suppose I should go see if there’s any change there). Update: As of noonish today, 6th April 2018, they are still up and running–and still up for sale.

Excess Solutions (who moved from their old Milpitas location to a 7th St San Jose site a couple of years ago) is still open, although the computer equipment stock seems to have decreased in the last few months (and the furniture focus seems to have gone up). If they’re the rumored buyer of the Weird Stuff inventory, I expect they’ll take Weird Stuff’s place as my weekly destination in the near future.

There are a couple of other smaller recyclers around who seem to do retail. If you know of any that you can give feedback or pictures or recommendations for, please leave them in the comments below.

And if you’re in the area, you have just short of three business days to make a last visit to Weird Stuff Warehouse. I’m guessing the crowds will be bigger this weekend than pretty much any time I’ve been in the last 10 years, so be prepared. There’s still only one cash register.

Twitter’s @njrabit found an apparently little-known connection between Halted and Apple / Steve Jobs, as confirmed by Steve Wozniak some time ago. This fits well with the not-for-sale Woz-signed WeirdStuff tee shirt you may see near the cash register there.

WeirdStuff sent out a notice to their email newsletter list (mine came in this afternoon). A printed version has also been posted on Twitter by @HunterScott.

Not much is known (yet) about Outback Equipment’s intentions regarding the inventory and assets. They seem to be primarily an experienced eBay seller of large equipment, based in Gilroy and Stockton, although they do allow local pickup at their Gilroy facility.

As of about 7pm Pacific on Sunday, 8th April 2018, the WeirdStuff website is gone.

Their announcement said to “check the website after Monday, April 9, 2018.” I guess we’ll see what news comes this week. 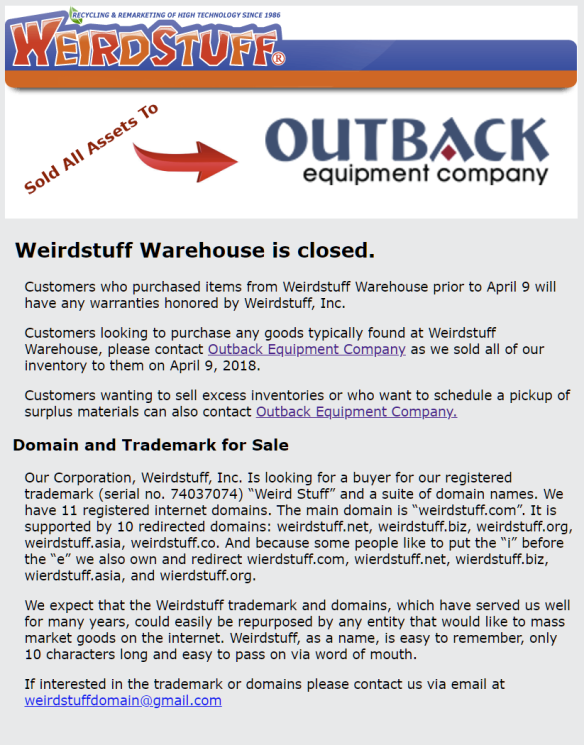 Unfortunately but not surprisingly, it mostly confirms what we already knew, and does not suggest anything from the Outback side. Here’s hoping Outback decides to do something for WeirdStuff customers, even if it’s just Saturday sales like some other Bay Area companies used to do.

2018-06-03: I missed this update, but Outback Equipment Company posted on April 9th that they would be selling some of their acquisitions through their website and the eBay store outback6.

This post will continue to be updated if and when further useful or interesting details emerge. If you’ve found other places to fill the gap Weird Stuff leaves in my weekend, please drop a comment below.