We’re continuing our look at NBase-T after several visits with the NBase-T Alliance and some of their partners at Interop in the past couple of years. This post’s focus is going from theory to practice, and what’s on the shelf for the SOHO/POHO deployer in the audience.

If you haven’t read the first part of this article, check out When speeds and feeds really matter from last week.

What is NBase-T and Why Do I Care?

As a quick refresher, NBase-T is a technology standard that allows a range of connectivity rates from 100 megabits to 10 gigabits, specifically introducing support for 2.5 and 5.0 gigabit rates, over Cat5e or Cat6 cabling. With this technology, most enterprises can grow beyond Gigabit Ethernet at typical building cable run distances without upgrading to Cat6A.

What’s on the market today for NBase-T?

As we discussed last time, it’s taken a while for NBase-T gear to become generally available. Wave 2 Wireless-AC has made it more of a need in many environments. But it wasn’t until mid-2016 that you could find a selection of system-level products to fulfill your 2.5/5 gigabit needs.

Since rsts11 focuses on POHO/SOHO/small enterprise, we’ll focus on offerings that are on the lower (four-figure) end of the budget spectrum. The NBase-T Alliance has a database of products submitted by its members, so you can check for higher end gear, components, and so forth at your leisure if you’ve outgrown these offerings.

At Interop Las Vegas, I had a chance to talk with the Netgear team and check out some of their hardware announced at the event. The M4200-10MG-PoE+ switch (Netgear link), retailing for under $1200 at Amazon as well as other retailers, is a fairly good starting point for implementing NBase-T. 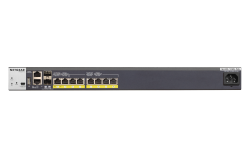 If you’re running all the ports at 2.5G, you have 1:1 subscription for two 10gig uplinks. If you need some 5G connectivity as well, you’re 25% oversubscribed at peak, but normally that should be practical to handle.

Since Interop 2016, Netgear released a WAC740 access point (Netgear link) to go along with the M4200. This access point, showing up for $585 on Amazon, has a 1G and a 1/2.5G Ethernet port for connectivity. It will require a wireless controller to manage… the WC7500 (Netgear link) which supports 10 access points out of the box will set you back another $1k or so. You can add a license upgrade to support 15 APs if needed.

Meraki has offered cloud-managed wireless access points, switches, security devices, and more for quite some time. I’m a big fan. [See disclosure below.]

Meraki does bring a certain premium, especially when you take the annual licensing into account, but for a substantial range of users, it’s worth the expense. The central management of switching, wireless, security, and now phones and cameras, can make deployment and ongoing administration easier than using one-off methods.

We’ve seen two leading options for the shiniest NBase-T use case — Wireless-AC Wave 2 — but what if you want to connect a host to one of these ports? Spoiler alert, it may not be as expedient as you’d hope.

There were five network interface cards presented at Interop 2016 (above). These offerings would allow NBase-T connectivity to any system with a PCIe card slot, making them useful for workstation expansion, homegrown NAS platforms, or for the masochists in the audience, a homegrown switch.

Unfortunately, there still aren’t many options that you can go out and purchase off the shelf (or the Amazon app).

You’ll see the LyCOM Technologies NW-103, Acelink EX-8102P (not showing up on Google or even Bing!), ASUS Republic of Gamers ROG 10G EXPRESS (announced in 2015), (unbranded) IOI GE10-PCIE4XG201, and STLab N-420 cards in the picture. When I checked these out over the summer, I couldn’t find retail options for any of them. Looking today, the N-420 apparently is sold by Central Computer in the San Francisco Bay Area for about $130, and the others appear to still be missing in action. One of the ASUS cards spent a few cycles on eBay but appears to have gone unsold, although a home server forum poster reported having acquired one for about $90.

However, all hope is not lost. Startech’s ST10GSPEXNB is a short PCIe x4 5-speed card (100/1000/2.5/5/10GbE), listing at $341 from the manufacturer and selling on Amazon for $275. Like some of the cards mentioned above, it apparently uses the Tehuti controller and Aquantia transceivers.

(It’s interesting to note that the ST10000SPEX card, which supports 100/1000/10GbE, is about $40 cheaper. Both support Windows desktop and server platforms, Mac OS, and Linux. I’m not seeing VMware vSphere support for the 5-speed version, although Hyper-V is called out.)

If you’re looking at building a new workstation to use NBase-T, the ASUS Republic of Gamers Maximus VII Extreme/Assembly kit includes a motherboard and the 10G EXPRESS card for about $500. It’s a pricey option if you just want 5 gigabit connectivity, but it’s a nice bundle if the specs shine for you.

There’s also an Akitio card on Amazon ($193 at the moment) that seems to be designed for RAID array expansion, but claims reasonable OS support. Caveat emptor, of course.

And another item coming soon, that Peter Jones tipped me off to… Promise Technology has announced a Thunderbolt 3 to NBase-T adapter. There doesn’t seem to be pricing or availability information yet, but I have a poke out to see what the story is with that adapter.

I had been procrastinating with this post, hoping to get some gear in the home lab to try out, but that hasn’t quite happened yet. Surprisingly, the NIC availability hasn’t changed much since summer, but hopefully with Promise bringing an adapter out that will work with the new Dell XPS laptops, that will change soon.

After pondering the price points and functionality, though, I would say that if you’re looking to boost your wired connectivity, 10GBase-T or traditional SFP+ 10 Gigabit Ethernet is the way to go. If you’re trying to expand into 802.11ac Wave 2 for faster wireless connectivity, NBase-T is the path you should choose. It seems unlikely that 10 Gigabit access points will be as available as NBase-T APs in the near future, although maybe we’ll have some good news on that front after Interop ITX 2017.

If you have questions or comments on NBase-T, feel free to chime in on the comments. Are you looking at NBase-T for your deployments, or are you going straight to 10GBase-T?

Disclosure: While this blog is independent and predates (by 3 1/2 years) my working for a hardware vendor, I do work for Cisco, who own Meraki. Both Cisco and Meraki have NBase-T gear on the market. My coverage is not influenced by that affiliation, and wired and wireless networking are not a part of my day job at Cisco. I do get employee discounts on some Meraki offerings, and run my home network primarily on Meraki gear, but (as of the time of posting) have not acquired any of the Meraki devices (or any other devices) listed in this post.

Amazon links are affiliate links, and the rsts11 team may get a small commission if you shop through those links.