[This is the first of a category of “quick take” posts that should be shorter and more frequent than the long, drawn-out, deeply detailed posts I usually procrastinate for weeks on. Let me know what you think of this format as a supplement to the usual volumes.] 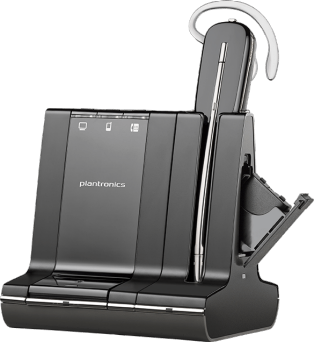 The Savi W740 (currently $234 on Amazon) is a three-connection (PC via USB, Cell phone via Bluetooth, Desk phone via various methods) DECT wireless monaural headset with charging station and pretty good range. I can usually get 100-150 feet though the entire depth of our house into the front yard and almost to the street without dropping the headset connection.

The Savi W745 (pictured above) is a Savi W740 with a battery charging module rather than the headset-only charging module. Oddly it’s about the same price as I write this post, $227 on Amazon, although the prices vary from day to day, or if an accessory like the headset lifter is included. Note that the model W740-M and W745-M are optimized for Microsoft softphones; I don’t use Lync or the like so I didn’t try those.

The headset unit is the same WH500 unit between the two models.

One thing I really liked about this headset was the “unlimited talk time” when you use a second battery. It takes less than five seconds to change out the battery, and while the headset loses audio, your call doesn’t drop, and can be resumed once the new battery is recognized. With about 4 hours of battery life per battery, you can make it through an entire day of meetings and calls without losing your connection. You might lose your mind, but that’s beyond phone technology to fix.

After using the W745 for almost three years, I started to experience an odd failure in the headset. When I would push the rocker switch “down” to reduce volume, I would get a scratchy sound and the headset connection (not the call) would drop. After about five seconds it would beep and reconnect. Future use of the down switch on the same call would be fine, but on the next call or audio session the first “down” would drop the headset link briefly. This was the case for PC and desk phone connection.

I had an exchange with Plantronics customer support, and while the “try another headset, and then try another base” wasn’t the most efficient troubleshooting, I was able to borrow a headset and found that the problem “went away.”

I do have a couple of used Jabra headsets around that I may give a try to (either a Jabra PRO 9460, $200 on Amazon, or a Jabra PRO 9470, around $240 on Amazon). although I’ll need a new “electronic handset” or EHS cable to let the headset system control the switchhook on the phone.

Have you had good (or other) experiences with any current multi-connection wireless headsets? Please share them in the comments below.

Disclosure: While my desk phone is manufactured and provided by my employer, and while Plantronics has provided me with two personal headsets at past events (the 5200 in 2017 in a drawing and the 6200 in 2018 as a “trade-up”), the headsets mentioned in this post were purchased by me and paid for out of my own pocket.