I’ll apologize in advance to George Clinton.Video below.

As I prepare to transition out of my current job, my priorities change and I have to be a bit more cautious about what I get involved in, so as to not leave anyone hanging when I do hand over my badge in just over two weeks.

I’m reminded of the decision-making scheme we were taught at eBay–RASCI. That’s

This model was obviously intended to set out expectations and points of responsibility within a project, defining responsibility and telling people who would be on either end of a communications channel as well as who is actually hands-on-keyboards (figuratively or literally) to do the actual work. However, it has another useful role.

At the point where someone gives notice and their countdown begins, they would move into the “C” category. They no longer get action items, presumably no on-call, and the ability to focus on passing along knowledge as needed to the people who would pick up their areas of responsibility.

I’m in the C category now at Disney, There’s a lot to be done, but I can’t take long-term ownership of it anymore. What I can do is work with the folks who are taking over for me, make sure they have the tools and contacts to do their best in my absence.

But what’s this with the mongoose?

Well, that’s controversial. RASCI is the name eBay gave to the mascot for their process, He’s the “decision-making mongoose at eBay.” There was a stuffed version (I have one somewhere in the garage, I’m sure), and it was entertaining and a bit creepy. There was also an unofficial travel blog, with pictures of RASCI in various settings. I can’t find that anymore, but it was out there, I promise.

My fiancee wondered why anyone would need a mascot for decision-making. Fair point, but it does make the model more personally accessible for people who aren’t in project management. And how many mongooses (mongeese?) do you run into in your daily life?

Well, I’m going to Cisco. I don’t know about you guys.

But seriously, RASCI or its variants may be worth considering if you’re having problems with identifying roles in a project, or even if you aren’t yet. You don’t have to use the mongoose, but hey, it’s there.

It’s also worth considering RASCI or the like as a means of communicating a transition of responsibility, whether someone is leaving a project, a department, or the company entirely. Who owns that piece of infrastructure the guy who just left was handling for years? Who remains in the department to provide support and receive reports?

If you have experience with RASCI/RACI, or if you have an extra RASCI doll in need of a new home, let me know in the comments.

And for those of you who might not have known the title reference, have yourself some P.Funk. 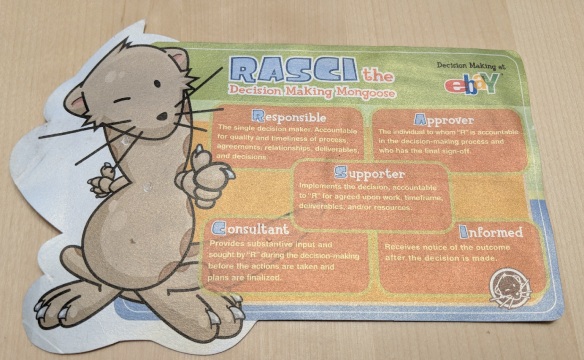 6 thoughts on “The Awesome Power of a Fully Operational Decision-Making Mongoose; or, RASCI as a transitional responsibility model”